Music Is The Weapon (Interview)

By Bill Forman for the Independent (June, 2011)

Think of it as a pre-emptive strike. Ricky Sweum, the bright young tenor player who over the last five years has established himself as one of the most creative forces in our local jazz scene, is transferring to Alaska. Due to recent changes in Air Force Academy policy, members of its Falconaires Big Band will no longer stay in the Springs on permanent assignment. So rather than risk the luck of the draw, Sweum asked to be transferred to the USAF’s highly rated jazz band in Anchorage.

In an added blow to the local jazz community, bassist Jason Crowe is transferring to Japan, while drummer Henrique De Almeida will enter civilian life as an instructor at Boston’s prestigious Berklee College of Music. The three musicians did their last gig together at Cucuru Gallery last month, playing material from Sweum’s stunning 2009 debut album, Pulling Your Own Strings.

Like his fellow West Coast native Ambrose Akinmusire, Sweum belongs to a new breed of young jazz musicians who recapture the adventurous spirit of John Coltrane, Sonny Rollins and Ornette Coleman and channel it into something entirely original. This Friday, during a special farewell show, he’ll swap solos with two other tenors: Denver’s Keith Oxman and the Springs’ own Brad Eastin. After that, he’s off to New York City, where he’ll record his sophomore album, before relocating with his family to Anchorage.

Needless to say, he will be missed.

Indy: So you’re going to Alaska, your bassist is going to Japan, and your drummer is going AWOL to teach at Berklee. How did this all come about?

Ricky Sweum: Well, maybe not everybody knows this, but about a year and half ago, the Chief of Staff of the Air Force started looking into his Air Force — as he should be — and investigating how things are run. And the band came under his scrutiny. He wanted the bands to have a lot more movement, just like other areas of the military that are able to move around.

One of the special incentives of being in a premier band is that you can spend your entire career in one place. And the way regional bands operate is that you only stay in the same place for a short time.

Indy: How does a band go from premier to regional, or vice versa?

RS: It almost never happens. The only two premier bands were here and in D.C. Since the inception of the Academy in 1955, it’s been a premier band. And so that just went away.

Indy: What’s the overall rationale behind moving people around?

RS: Well, I’m guessing here, but what makes sense in my brain is that, being a member of the military, I mean, our bottom line is we fight wars. And when people fight wars, people die. And so if you have a particular job and you die, the culture of the military needs that job to be filled quickly, and still performed at the same high level that your predecessor was performing it at. This liquid, very flexible, move-here-to-here-tohere-very-rapidly culture is the one that most military mindsets operate in.

Indy: So do Air Force musicians get flown overseas to do gigs?

RS: Yeah, a new part of our mission is that we’re sending bands over to the war zone area, playing music there fulltime. So 365 days out of the year, we have a band over there. We usually only go three to four months at a time, and as soon as one of our groups comes back, we’ll send over a band from another part of the country. And so we’re always sharing the responsibility.

Indy: Have you been sent overseas, or do you expect to be?

RS: It’s sure to happen eventually. It just hasn’t happened to me yet.

I think it just speaks to the power of music. A joke that we use around the squadron is, it’s fighting the war on terrorism one note at a time. That’s kind of tongue-in-cheek, but I strongly believe what I hear from friends who’ve been over there.

They’ll use the band to get into areas that are maybe not so favorable towards Americans, because they’re used to seeing people carrying guns around. And when they send people playing music in there, it can build trust, because we all speak this universal language of music.

Indy: How did you hook up with the Air Force Academy to begin with?

RS: I was 29 and I’d been living in New York City for 10 years, because that was where all the creative music was going on. My goal there had always been to be able to support myself and a family as a musician, but the only way that I was able to really make that happen was to leave New York with these touring bands. I did the Tommy Dorsey Orchestra for a while, and I did this Sound of Music Broadway show tour. That’s how I ended up meeting my wife; she was in the cast, and we actually played Colorado Springs.

When I saw the ad for the Academy band, I called the number, and Brad Eastin was actually the first guy I talked to. He was in charge of auditions, and he sent me the whole packet of information. And so I’m reading the requirements — proficient in all styles of improvisation, big band reading, sight reading — and I’m just like, this is a great fit.

Indy: Still, you must have known that, in terms of creating original music, you’d have to do that part on your own.

RS: Yeah, it’s very much a studio-musician job that I have at the Air Force Academy band. We’re asked to play all different styles of music and to perform, at a very high level, written music under the direction of someone else’s vision. And I just contribute to that the best I can.

But for me, as that New York creative musician, I’ve got to get outside of that and have my own projects going. So yeah, there was a fair amount of me that knew there would be different requirements for me than what I was wanting for myself in New York, living the life of a creative jazz musician.

Indy: No heroin, for instance.

RS: [Laughs.] Yeah, right. Well, it’s amazing, at least in my experience in New York, how clean it was. At least with the people I hung out with.

I mean, we’re a more knowledgeable generation, as far as how to be healthy. There’s a whole lot of paradigm shifts that have happened in the last couple generations, which have transferred into the life of a typical jazz musician. So I think that stereotype of Art Pepper or Charlie Parker, where heroin takes over their life, you don’t really see that as much today.

There are a lot of people that feel they have to experience hardship and pain in order for there to be value in their music. But the way I see it, I’m in my late 30s right now, and it’s almost impossible to not have a certain degree of suffering that you pass through. So you don’t have to force immediate suffering on yourself. Life is hard and challenging, and so it’s a matter of overcoming that, and experiencing that hardship with an open mind.

Indy: So how do you see the jazz scene here developing in the years to come?

And yet I don’t see — this is my own opinion — I don’t see enough people moving outside of those organizations to create their own thing. And so I see Brad as one of the longtime leaders who’s done an amazing job at really helping keep the music scene alive here in Colorado Springs. And he’s gonna continue doing that. 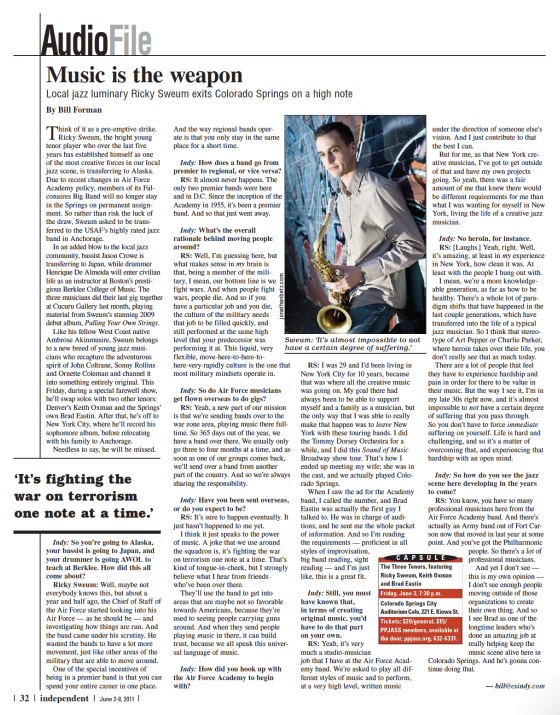